1. What is Sentiment Analysis?

Many traders only focus on the price when looking at the market. However, all dimensions of the market must be considered for a complete analysis: Price, Time, Momentum and Sentiment.

What is the meaning of the term ‘sentiment’? How can the trader use it? How does the sentiment analysis work and which sentiment indicators should you consider?

This article will answer these questions.

Sentiment means the spirit of the market. It shows how the market participants assess the actual situation and the further development of a market. The sentiment tells you whether the majority of traders see the price development bullish, i.e. positive, or rather bearish, i.e. negative.

3. What are sentiment indicators

The markets reflect the mood of the masses. Movement in the market occurs when market participants buy or sell. Sentiment indicators measure this mood and quantify it. 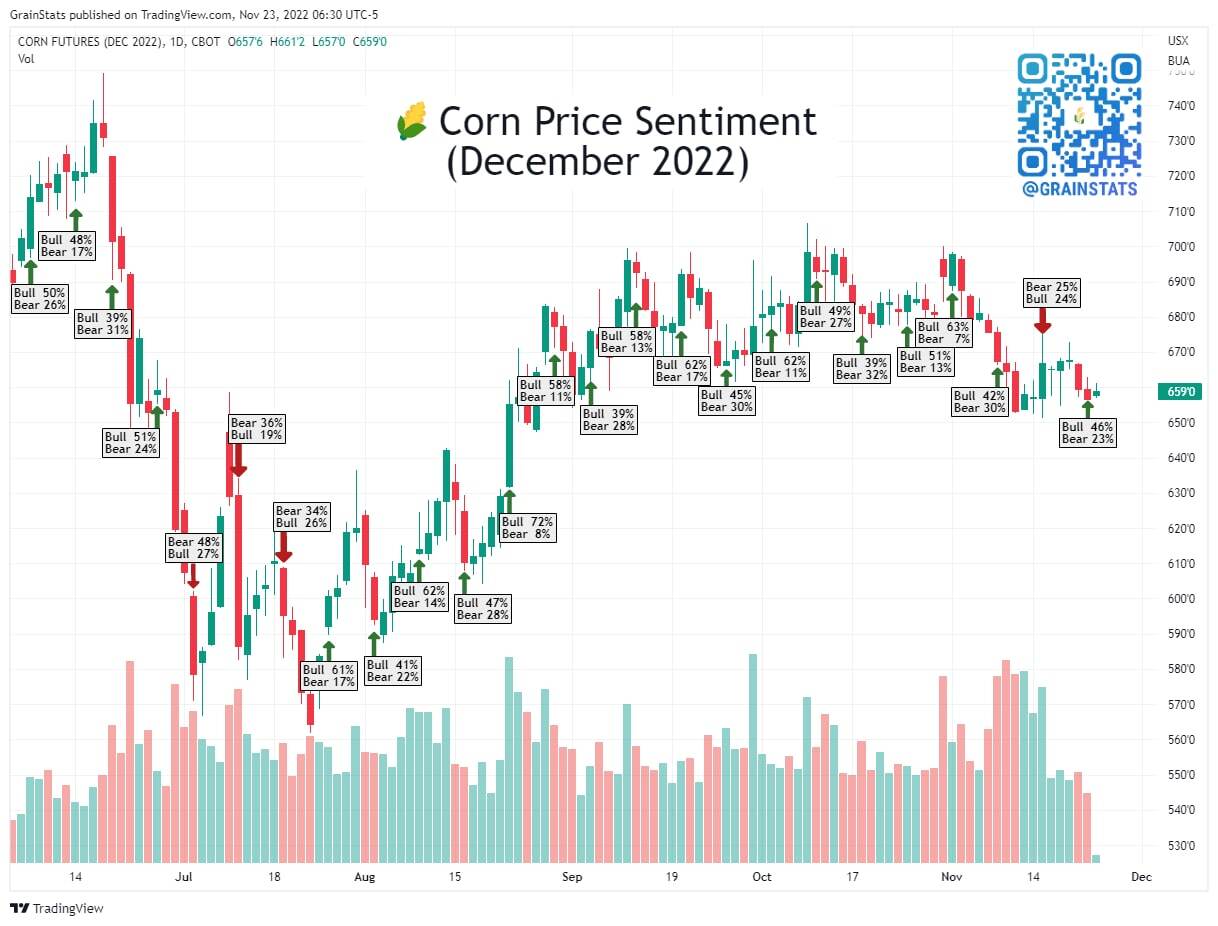 Fig. 1 Example of a sentiment indicator: Monthly survey of subscribers at grainstats.com.

Successful investors take advantage of sentiment at the stock market.

Emotions in the market range from fear to joy to greed. Indicators measure the level of these emotions. If the mood in a particular market reaches an extreme level (optimism/euphoria or pessimism/panic), the market becomes susceptible to a countermovement.

Fig. 2 Emotions and moods in the markets.

Sentiment indicators help you to identify such market peaks and troughs. The bottom of a market is reached when the sentiment values match those of a previous low.

Humans are social creatures, and we like to live and work in groups. However, in extreme market developments, this can be a disadvantage. If a market is in an upward phase and reaches a significant high, many do believe that the trend will continue. If you know that market sentiment has reached an extremum, this can give you an advantage.

4. How are sentiment indicators formed?

Basically, there are two different methods of gathering relevant data. The results are then referred to as "hard" and "soft" data.

Surveys of active investors or specific investor groups (analysts, consultants) are used to try to gain an accurate picture of market sentiment. This type of data collection has a long tradition, especially in the USA.

Indicators can often be obtained for a (more or less expensive) fee. Examples:

One of the pioneers in the field of sentiment indicators. The report is published daily or weekly and can be subscribed online or via e-mail. Prices range from $15 monthly (Weekly Update via e-mail) to $45 monthly (weekly newsletter plus daily online hotline). 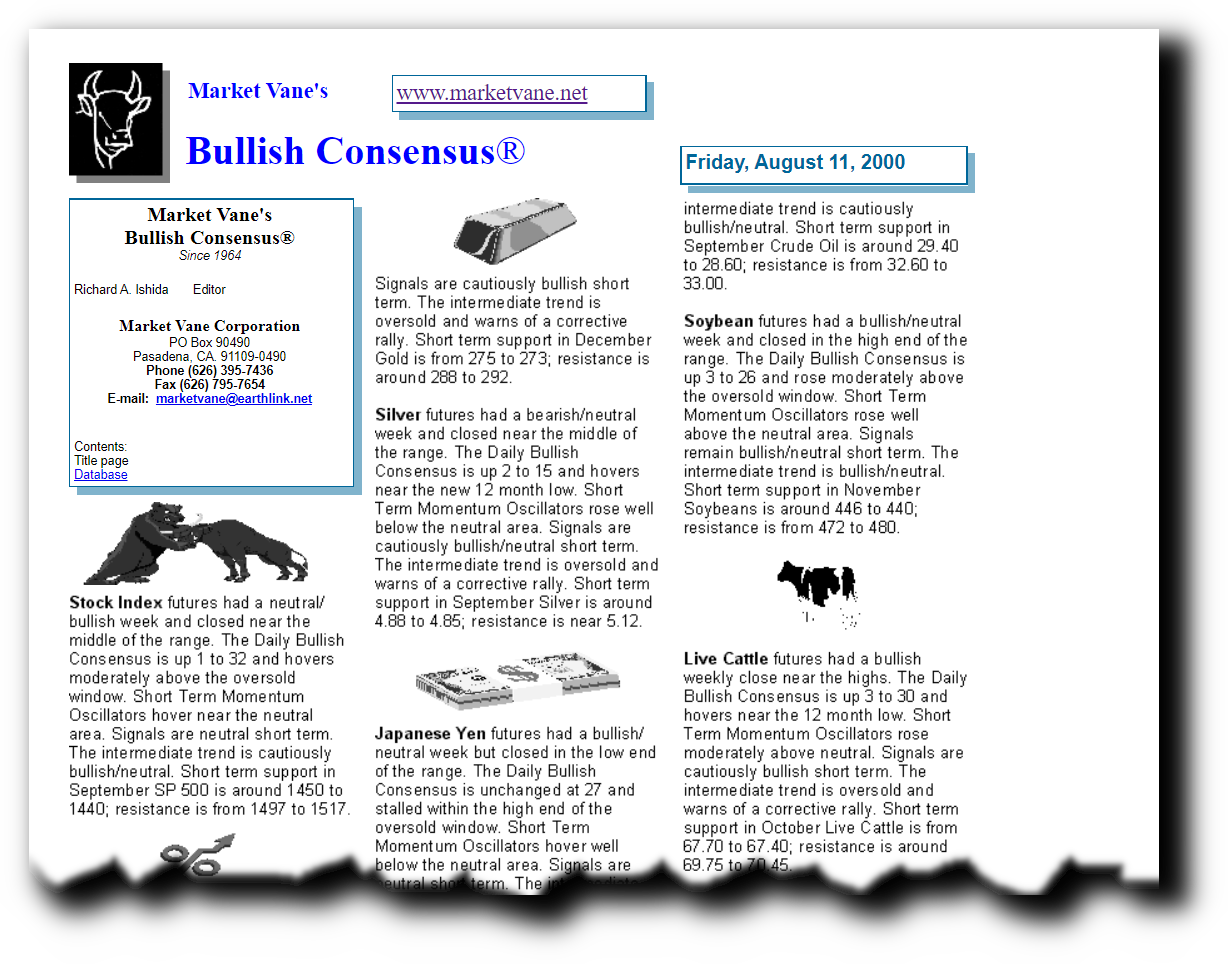 The company "Investors Intelligence" is also one of the pioneers in the field of market analysis. The annual subscription of its report "Advisors Sentiment" costs $345. 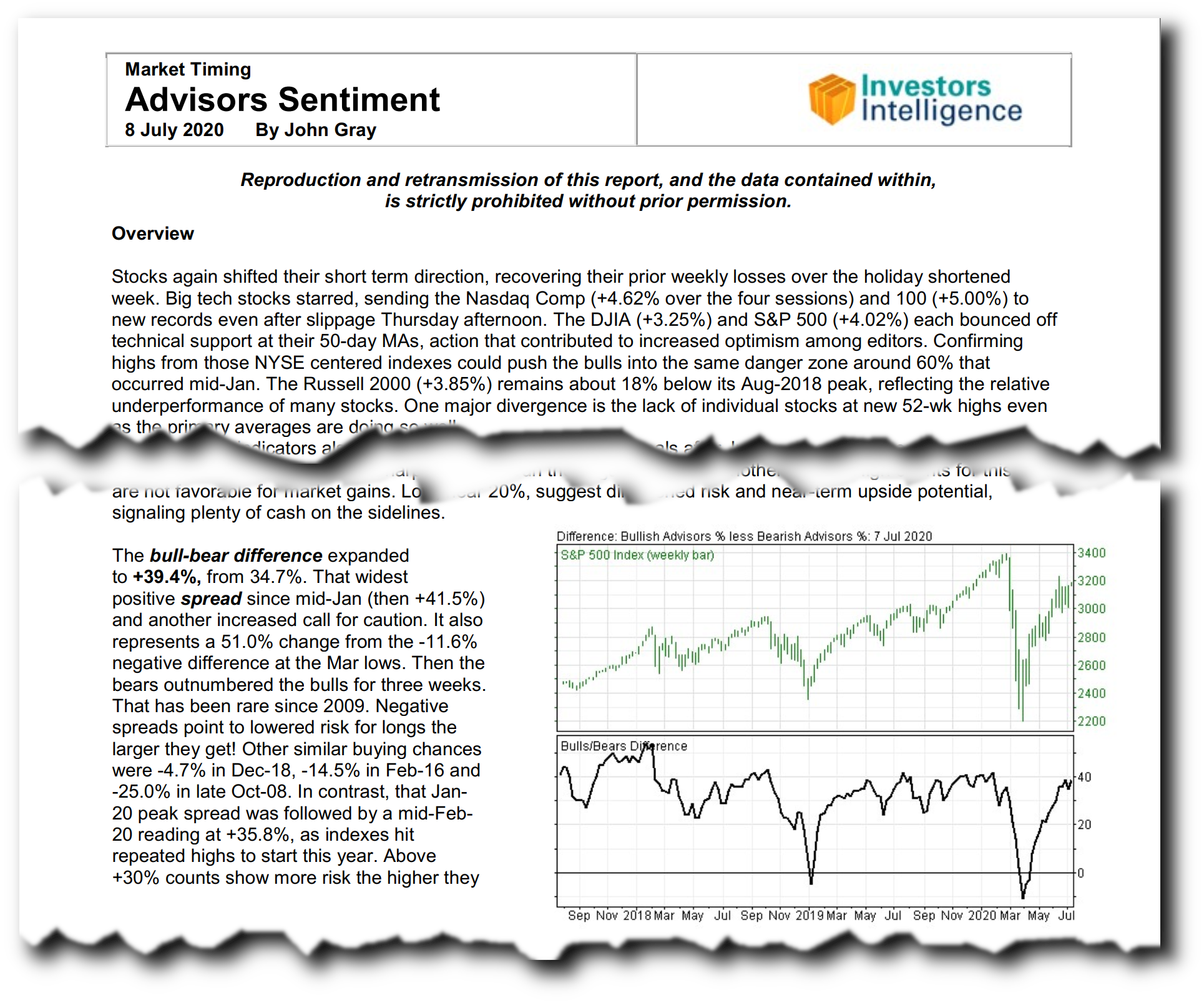 "sentix" is a free service for German-speaking countries (http://www.sentix.de). Users who register take part in weekly surveys on different asset classes. In return they get free access to the sentiment data of these classes and to the analysis of the results. 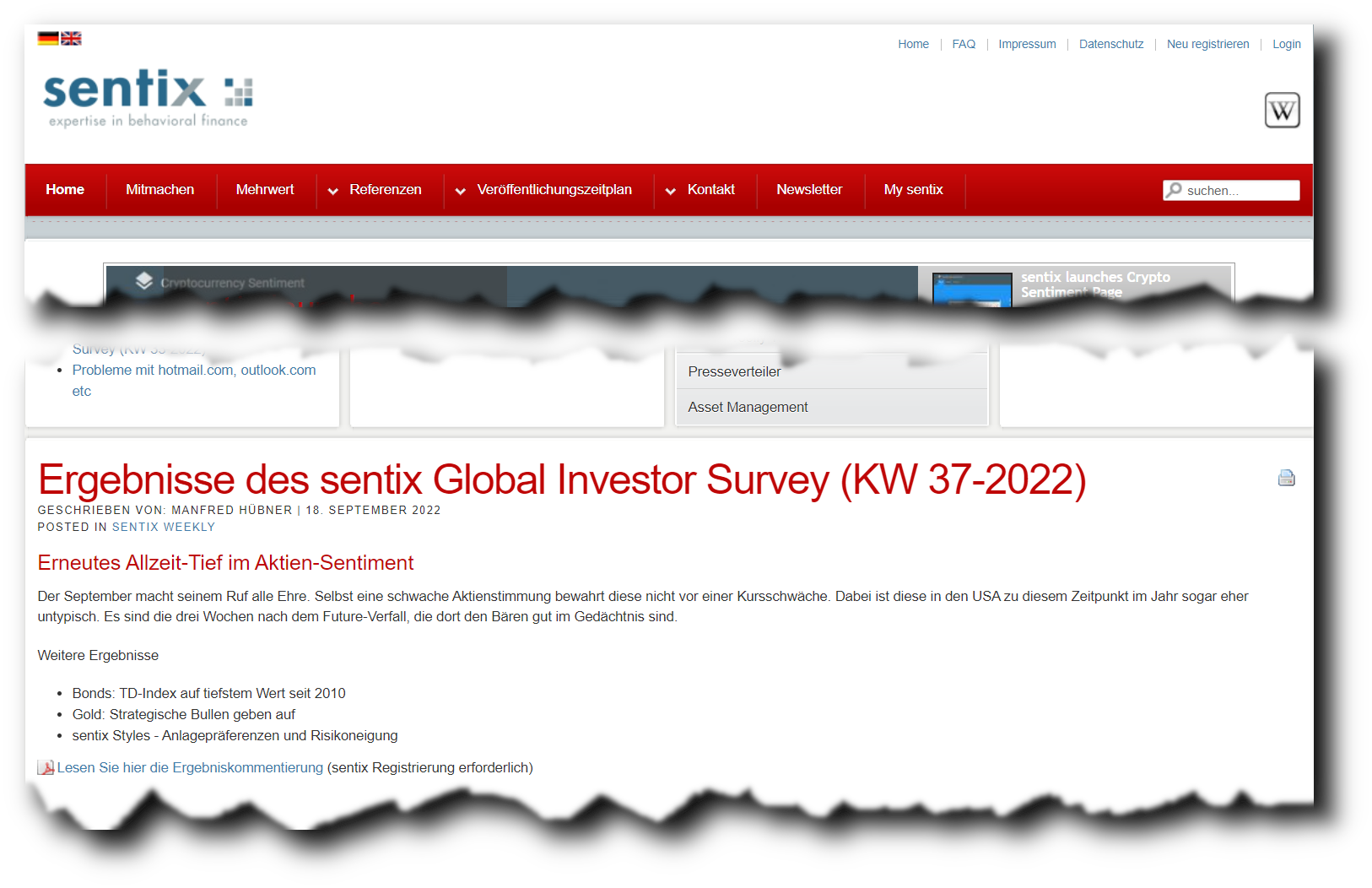 Sentix also offers a Bitcoin sentiment report. The newsletter (now again in English) can be downloaded free of charge. 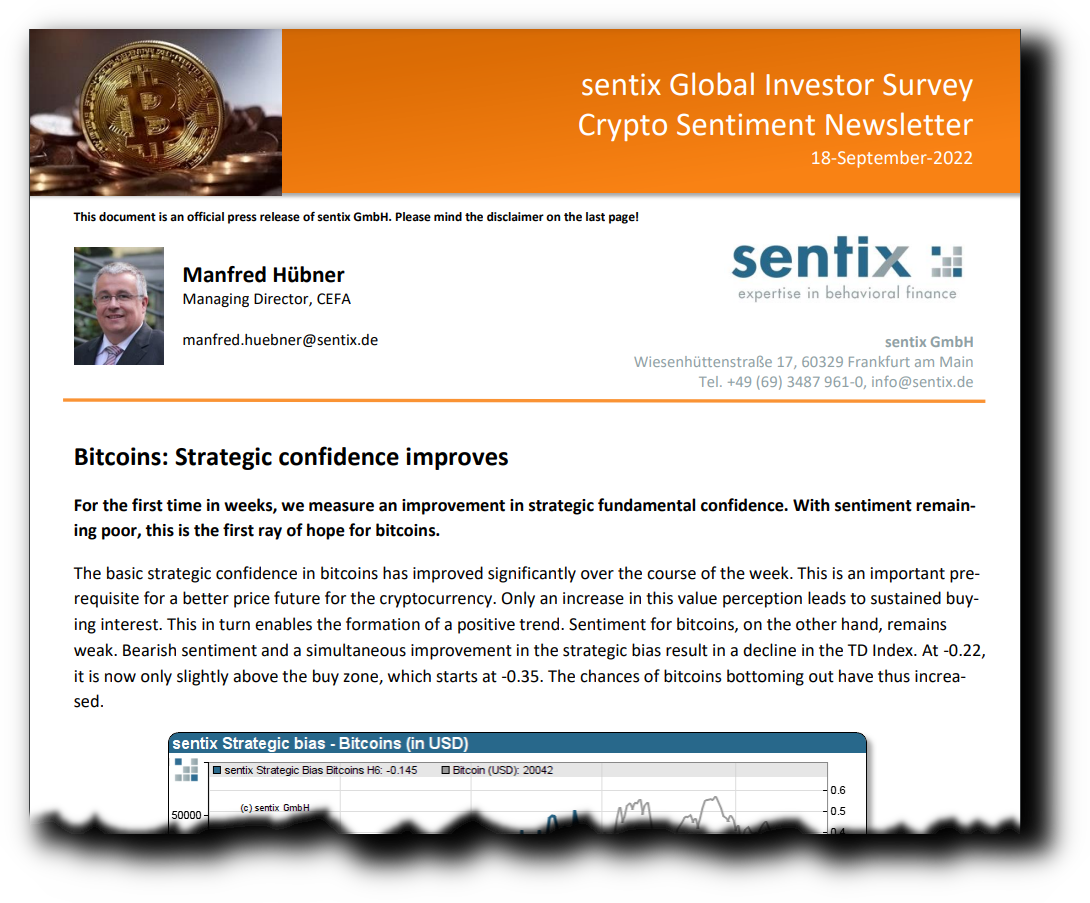 Hard sentiment data reflect the actual positioning of investors in the markets. They represent the active "market sentiment of the masses". Evaluating the long and short positions of market participants shows not only how the masses think but also how they act.

Sentiment indicators that present the "hard data" can often be accessed free of charge on the Internet.

Fig. 7 Calculation of the put-call ratio.

Due to extreme fluctuations of the curve obtained this way, most traders place an average line (for example SMA 5 or SMA 10) over it to smooth the indicator. The question of where to locate the relevant extreme areas should be determined visually based on the history of last couple of years.

The indicator can be found, for example, at barchart.com (with different calculation bases) or tradingview.com.

I will come to the explanation for this below.

5.2.2 Sentiment in Futures: the Commitments of Traders (COT) Report

Another helpful tool for capturing market sentiment is the Commitments of Traders report published by the CFTC (Commodity Futures Trading Commission).

This weekly market report is freely available on the internet (https://www.cftc.gov/MarketReports/CommitmentsofTraders/index.htm) and serves us here at InsiderWeek as the fundamental basis for our trading decisions.

Since almost EVERYTHING on our website revolves around the COT report, here is just a brief description of the report.

The COT Report lists the long and short positions of market participants in the futures markets, broken down by trader groups. Various versions of the report exist. The original form is the so-called "Legacy Report," which has a history dating back to the 1990s for some markets.

For the futures trader, the behavior of the commercials is interesting. They usually trade counter cyclically. If the price of a commodity rises and the commercials start to build up massive short positions (or reduce long positions), traders should keep their eyes open: it would then be possible that a trend reversal is coming to the end.

The Large Speculators are the antagonist of the Commercials. They are trend followers and their position chart is the mirror image of the commercials. 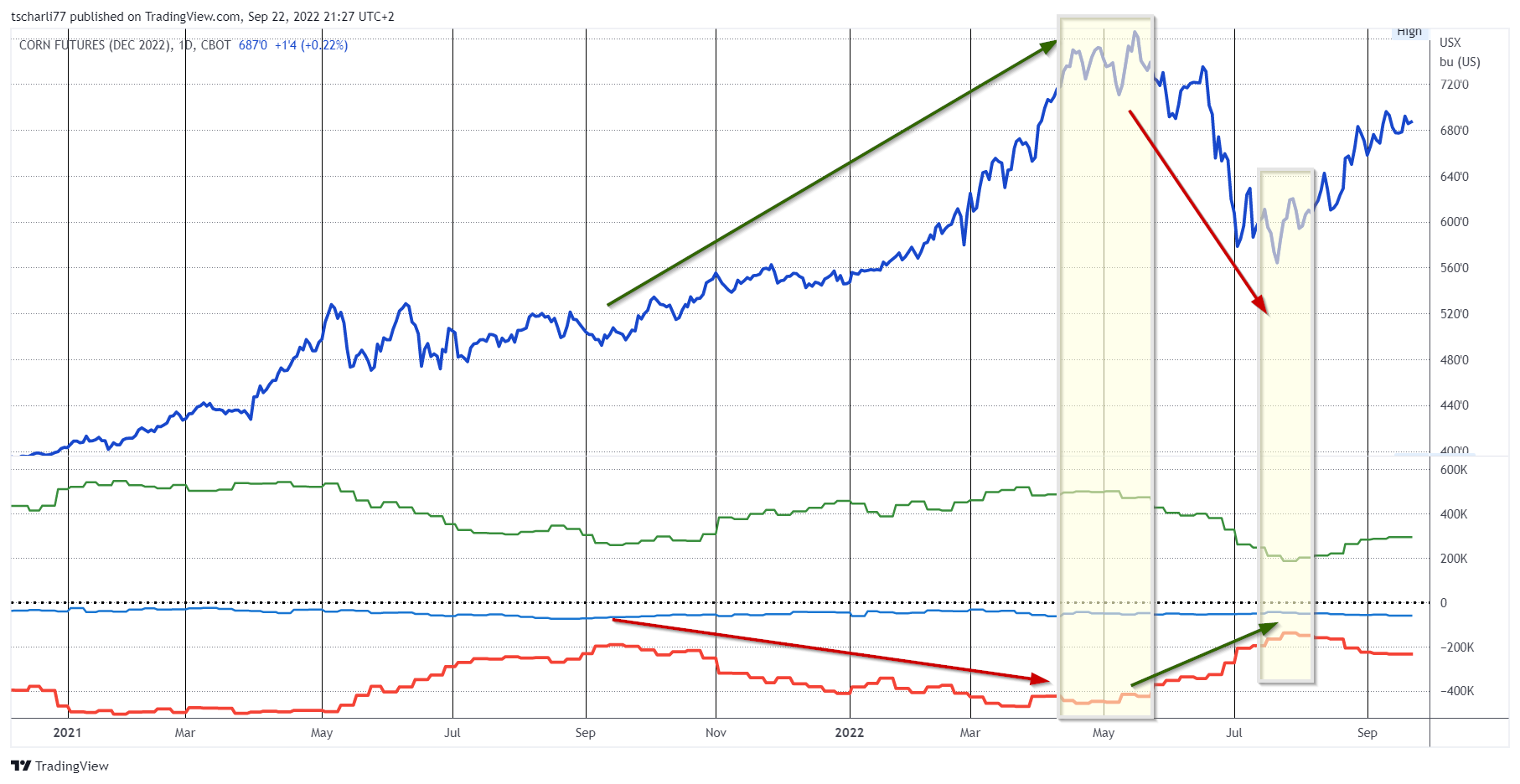 You can see the mirror image of the blue and red curves and also that the Non Reportables, i.e. the "small speculators", hardly play a role. The number of their contracts is so small that they have little influence on the price.

6. How do you use the sentiment indicators for your trading?

When a market has been moving in one direction for a long time, news and reports about that market almost always agree with the trend. On the surface, it now seems nonsensical to trade against this trend. And "trend followers" often „jump on this bandwagon" even now.

But here sentiment indicators can help you to stay objective. Because extreme sentiment readings correspond with extreme news. And you know that sentiment is now in a range where a change in trend is likely,

Warren Buffett once put it in a nutshell:

6.2 Are the masses always wrong?

If you look around on the internet on various trading sites, you will often find statements like "80 (or 85/90) percent of all traders are not successful".

*So does that mean that the majority of traders is generally wrong?

The matter is not quite that simple. The explanation is different: those traders who expect rising prices have already implemented this expectation with purchases.

*But if the overwhelming majority has already bought, then, at a certain point, there is simply not enough buying pressure to drive the market even higher.

So the upward movement will slow down and eventually come to a complete halt.

The same principle applies, of course, in a downtrend. If most investors have already acted on their fear of falling prices by selling, there is no further selling pressure and the bottom is not far away.

So the majority is not wrong per se. Rather, it is precisely this majority that makes a decisive contribution to the establishment of a trend. And it accompanies it over long stretches.

However, if the number of optimists (or pessimists in a downtrend) has reached an extreme level, it is advisable to look for a possible trend reversal.

7. Sentiment Analysis in Futures Trading with the COT Report

How can you use these sentiment indicators for your trading preparation? I will explain this using the COT data.

The Commercials dominate the playing field

While interpreting the COT data, we focus on the Commercials. They "live" on commodities and have the best knowledge and insights into the supply and demand situation of the markets. They use the futures markets to hedge against price fluctuations in the cash market.

We again take a step-by-step look at the December2022 corn futures (ZCZ2022) with the net positions of the commercials:

At the beginning of 2021, the commercials are extremely net short (approx. 500,000 contracts), while prices are rising. The commercials remain on their positions in a watch-and-wait mode.

February 3, 2023 END_OF_DOCUMENT_TOKEN_TO_BE_REPLACED
Success stories
Living and trading in Thailand - how good is it?

January 31, 2023 END_OF_DOCUMENT_TOKEN_TO_BE_REPLACED
Trading Strategy
What are trading strategies? An overview of the 4 most common trading styles

January 27, 2023 END_OF_DOCUMENT_TOKEN_TO_BE_REPLACED
COMMODITIES
How the Indian monsoon can affect resources

January 25, 2023 END_OF_DOCUMENT_TOKEN_TO_BE_REPLACED
Trading Strategy
What is Open Interest? With examples from futures trading