How the Indian monsoon can affect resources 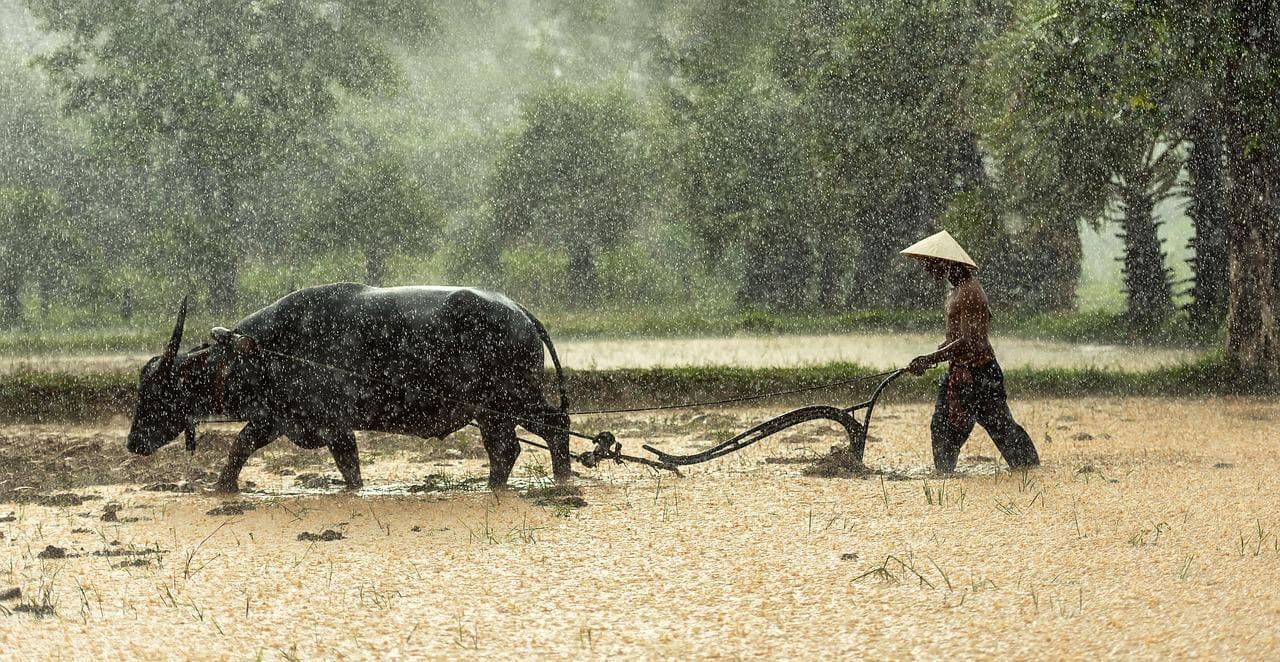 With commodities such as sugarcane and cotton, there are often price increases in the summer or fall when the monsoon is weak. The worldwide gold prices in the fourth quarter are also sometimes affected by the incomes that millions of farmers receive or do not receive due to a good or bad monsoon.

Why is this so? A consideration of a weather phenomenon.

Why is the Indian monsoon interesting?

The success of these crops is largely determined by the June-September monsoon, which provides about 70% of the country's annual rainfall.

Currently, there are signs of a new bull market for cotton. This is triggered by ongoing global inflation fears, the renewed intensification of drought in Texas, and the weak start of the Indian monsoon.

The impact of monsoons on Indian farmers

A majority of India's GDP is dependent on the growth and production of agriculture. India is an agrarian nation, with more than 50% of the Indian population earning their livelihood in agriculture.

The monsoon is the most important season for farmers in this country. A majority of Indian agricultural land is watered by the southwest monsoon. Field crops such as wheat, rice, and legumes are staple foods in India. They require strong rainfall in order to grow. 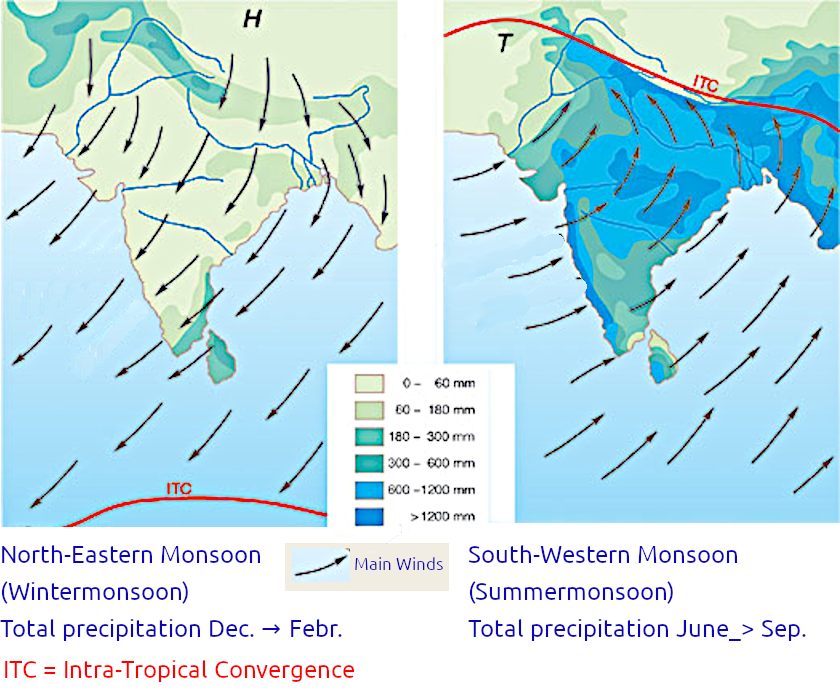 The two monsoon phases in India

The formation of the summer monsoon (Source: Wikipedia/Geo-Science-International)

A glance into the past: Floods and drought periods in India

A look into the past shows that during La Niña events, the likelihood of floods in India is much greater than droughts. In contrast, during certain (not all) El Niño events, droughts are more common.

One of the most significant drought years with an impact on the market was the summer of 2009. At that time, floods in Brazil in combination with a severe drought for sugarcane and cotton drove up sugar prices.

As for major floods, the La Niña year of 2010 is particularly remembered. The impact on Pakistani cotton production was actually greater than anywhere else. At that time, there were drought periods in worldwide wheat growing areas and a historical increase in cotton prices to over 2.00 USD due to La Niña problems.

The "Indian Dipole" turns negative: What are the possible effects of the Indian monsoon in light of the current La Niña?

This system has a cyclical duration of about 30 years, in which positive, negative, and neutral phases alternate in semi-annual cycles. During a positive IOD event, there is less rainfall on the west side of the Indian subcontinent and more rainfall on the east coast.

For example, in the year 1996, there was a wheat drought in the Plains and a spike in wheat prices until harvest (end of May and June, when prices began to fall). This year had a weak monsoon and a relatively dry late summer for more than 50% of the cropland. 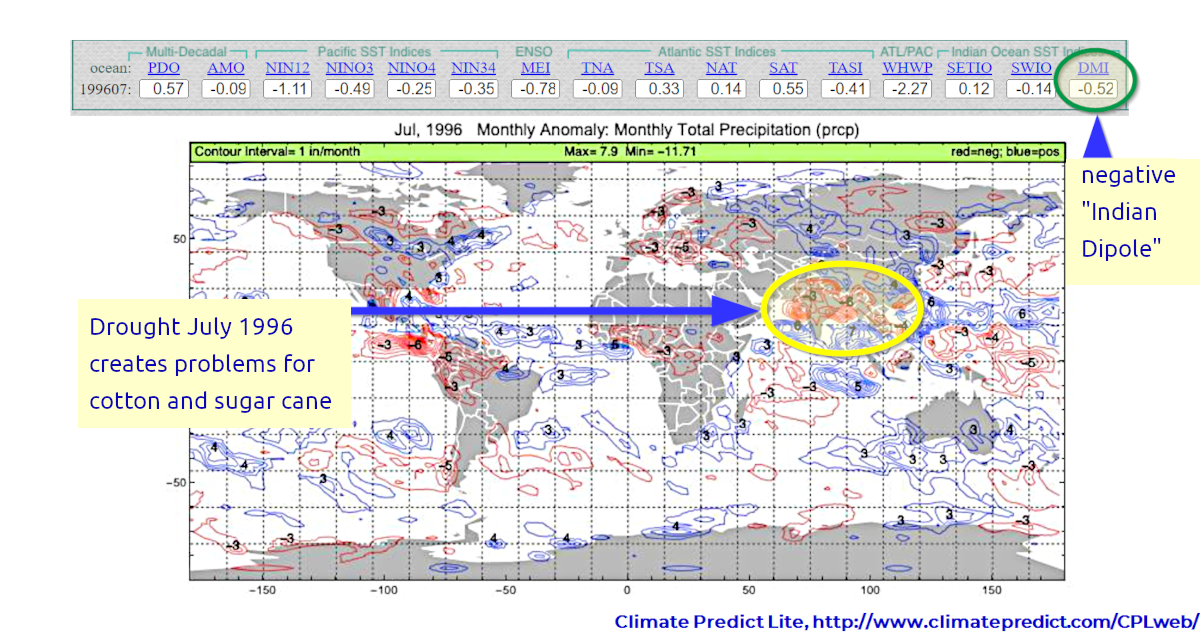 July weather in 1969 based on negative Indian Dipole and La Nina (climatepredict.com)

The Indian monsoon and the gold price

Interestingly, the monsoon also has a direct impact on gold prices. Gold plays an important role in the 10 million Indian weddings per year. The Indian "wedding season" lasts from late October to mid-January.

A strong monsoon provides millions of Indian farmers with additional income to purchase gold items associated with weddings. Drought periods, on the other hand, have the opposite effect. 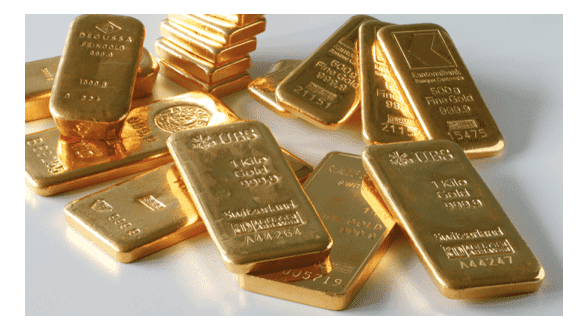 The Indian monsoon can influence the gold price in the 4th quarter.

The map shows low precipitation for wheat in the Plains and indicates a weak start to the Indian monsoon. 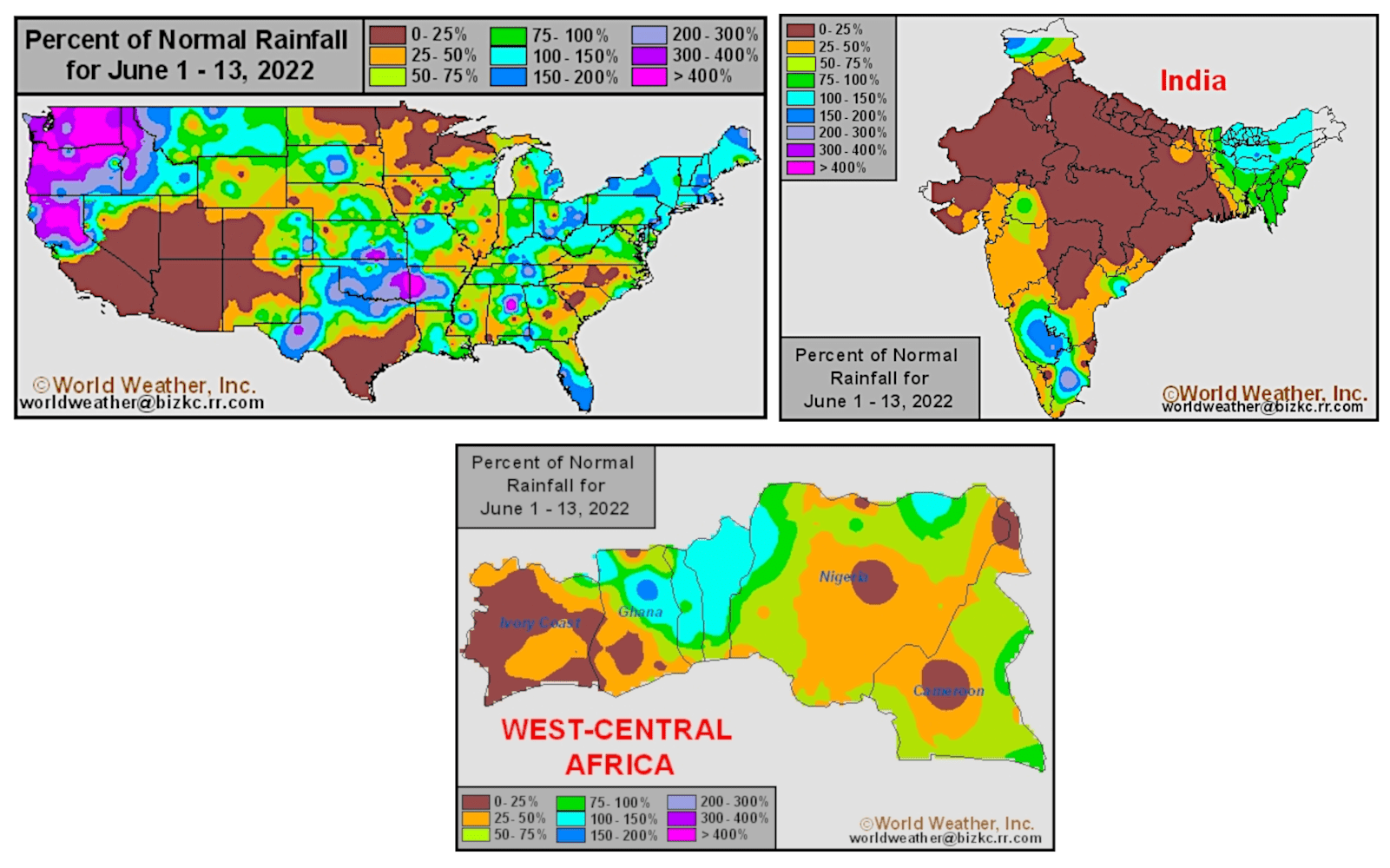 June precipitation anomalies (in % of normal)

We believe that cotton prices have the greatest upward potential given the already tight stocks, inflation fears, and the re-expanding drought in Texas. Other commodities such as sugar may also be affected if the monsoon remains weak until August.

Sugar prices have been moving in a tight range for months, in contrast to the incredible, historically volatile natural gas market. Higher oil prices are preventing a strong decrease in sugar prices. This is because higher sugar prices typically mean that Brazilian sugarcane farmers produce less sugar and more ethanol - more sugar is processed into ethanol, which is more profitable. A weak Indian monsoon would help sugar prices recover this summer, provided oil prices do not collapse.

We will keep an eye on it. As usual, we will publish our insights and conclusions from our research work in the member area of our weather course and in our telegram weather channel!

You do not know our weather channel on telegram yet? Find out here: t.me/insiderweek_en

We wish you successful action in the commodity markets.

Your team from InsiderWeek - Weather Desk. 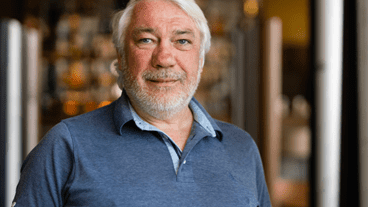 Karl-Heinz (Charlie) Ramer originally comes from IT, where he worked as a freelance lecturer, programmer and system admin. He found InsiderWeek through an acquaintance after suffering a hard shipwreck as a day trader. With Max's strategy, he was finally able to show success for the first time.

February 3, 2023 END_OF_DOCUMENT_TOKEN_TO_BE_REPLACED
Success stories
Living and trading in Thailand - how good is it?

January 31, 2023 END_OF_DOCUMENT_TOKEN_TO_BE_REPLACED
Trading Strategy
What are trading strategies? An overview of the 4 most common trading styles

January 27, 2023 END_OF_DOCUMENT_TOKEN_TO_BE_REPLACED
COMMODITIES
How the Indian monsoon can affect resources

January 25, 2023 END_OF_DOCUMENT_TOKEN_TO_BE_REPLACED
Trading Strategy
What is Open Interest? With examples from futures trading